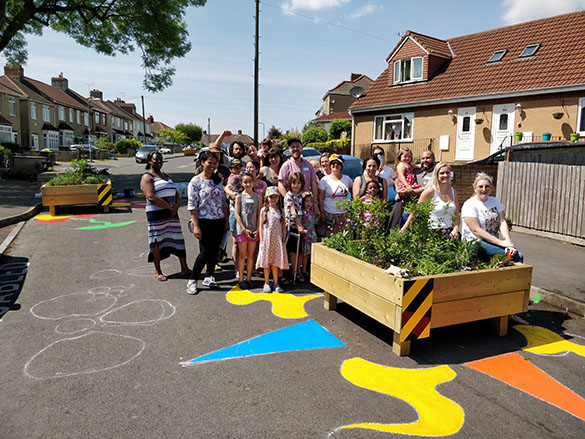 TRL, through funding from the Road Safety Trust and Bristol City Council (BCC), has evaluated a community led intervention to reduce excessive speeding behaviour and high traffic volume in residential streets. This included evaluation of impacts on traffic speed and volume and the quality of life of the residents through perceived impacts on air quality, noise pollution and sense of community/ social cohesion.

The interventions involved designing campaign material and undertaking street recruitment. A campaign was launched involving BCC, local councillors, and social media to reach out to residents of Bristol.

Four streets in Bristol were shortlisted as experimental streets for the project – Hillsdon Road, Ridgeway Road, Whitehall Avenue and Symington Road. Residents of these streets then formed a constituted group to organise community consultation meetings and lead the scheme implementation. This included submitting an application for a street closure, procuring materials and equipment, assisting with traffic surveys and conducting resident surveys. On the installation day, community leaders encouraged as many residents on the street to participate in the installation process as possible. The designs agreed on for each street were submitted to BCC for prior approval. Two control group streets were also recruited.

Following the installation of street furniture; evaluation of the scheme’s effectiveness was carried out using pre and post intervention traffic surveys (volume, by manual counts, and speed, using a hand-held radar gun) and resident perception surveys on both experimental and control streets. These were undertaken  three months after the installation in order to give the road users time to adjust to the change and settle into any new long term patterns of driving behaviour.

In comparison, control streets have been observed to exhibit a mixed trend, with traffic volume variation ranging from +15% to -9% on Northover Road and +20% to -17% on Reedley Road.

Traffic Speed was observed to reduce significantly on all four experimental streets compared with the control streets. The mean speed observed on control streets varied between +1 mph to -1 mph in ‘before’ and ‘after’ measurements. In comparison, the Community Corners achieved average speed reductions of 1 to 13 mph on different streets. This is comparable or better than the speed reductions achieved by more conventional measures found in the literature review: for example 3 mph (in case of rumble strips), 1-5 mph (central islands), and 2-4 mph (visual restrictions).

The secondary parameters measured for the study included residents’ perception on their community, environment on the street and safety perception. Although sample size limitations meant that statistically significant changes could not be observed for all parameters assessed, there was a positive trend in residents’ perception of safety and environmental parameters on experimental streets. This implies that such schemes do help in bringing communities closer to work together and change the feel of such streets that residents feel safer to walk, cycle, drive or let their children out on the street.

The full report is available here.